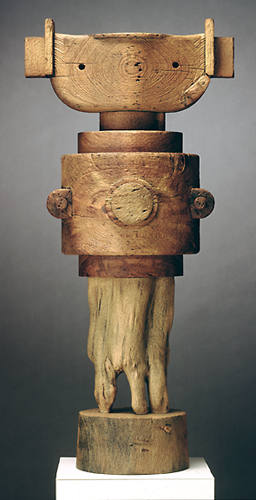 You might wonder what this 2-sided found-object wooden totem has to do with the story I have to tell. I met the artist, Michael Mrowka, in a Jungian painting group where I first began to paint in 1988. I purchased the sculpture to celebrate the publication of my second book, Dancing Girl. When I acquired the sculpture, I had no idea that I would name my next book after her—Michael had dubbed his creation “Dances in Two Worlds.” Even though I was commuting between Denver and the Greek village, Elika, at the time, and I had already begun to paint as well as write, I had yet to acknowledge that my life itself had become a dance in two worlds. In the title story of my book, I explain why the piece appealed to me and why I took her home twenty years ago. I thought you would like to see her.