For the Love of It—a reading & conversation 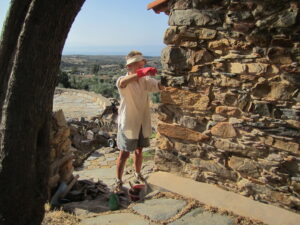 This program takes its name from an unpublished essay Thordis Niela Simonsen wrote in October 2012—almost 10 years ago to the day. It focusses on a hissing viper, a sacred precinct, and an undertaking that defied comprehension as much as it defied completion.

The story is one chapter in Thordis’ decades-long relationship with her Greek village, Elika, and a roofless house that she brought back to life stone by stone by hand.

Thordis’ reading will be followed by a conversation with the audience.

about Thordis Niela Simonsen
Your program guide, Thordis Niela Simonsen, is both a traveler and a storyteller. Her Greek village odyssey began in earnest in 1982 when the Ella Lyman Cabot Trust awarded her a grant for documentary work in the village, Elika, where she single-handedly restored a roofless stone house used to stable sheep. Thordis learned the art of storytelling from the narrator of her first book, You May Plow Here: The Narrative of Sara Brooks, and she blended villagers’ stories with her own in her second book, Dancing Girl: Themes and Improvisations in a Greek Village Setting. Her third book, Dances in Two Worlds: A Writer-Artist’s Backstory, is composed of two personal narratives, one verbal and one visual. Dances in Two Worlds was funded in part by a grant from the John Anson Kittredge Fund and won the 2012 Colorado Book Award in creative nonfiction. Thordis has been an independent small-group travel guide in Greece since 1995. She  resides in Salida, Colorado, where she founded the Museum of Authenticity: genuine encounters in art & life.