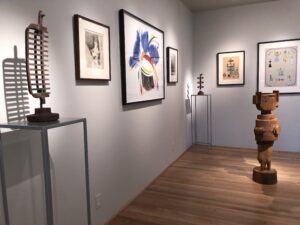 The exhibit DANCES IN TWO WORLDS features early- to mid-20th-century paintings by Native American artists and prints by Euro-American and American artists. Recent monotypes by MoA’s founding director and curator, Thordis Niela Simonsen, propel the exhibit into the present. The show derives its title from an assemblage sculpture so named by artist Michael Mrowka (American, 1955– ).

When I purchased it, I had no idea that Michael Mrowka’s four-foot tall Janus totem, assembled from wooden foundry patterns and a cypress knee, would become the catalyst for and centerpiece of the second major exhibit of a museum I had yet to envision.

Michael and I had been painting together in a Jungian art therapy program when I asked to visit his workshop—I had seen some of his constructions and liked them. My response to a particular component that was sitting on his workbench was so immediate and irrepressible that I promised him, no matter how long it takes to construct, no matter what its completed form, no matter the price, I will buy the sculpture, 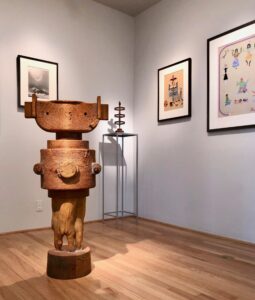 True to my word, I purchased “Dances in Two Worlds” upon its completion in 1991, just in time, as it turned out, to celebrate the release of my second book, Dancing Girl: Themes and Improvisations in a Greek Village Setting. That conjunction alone imbues the assemblage with personal meaning. But even more significant, projections on the sides of the head—the component I had seen on Michael’s workbench—remind me of the Hopi Maiden “butterfly” hairstyle. And the Hopi Maiden reminds me of postcards—and especially photographs of Native Americans—that my grandparents mailed to me during their annual fall trips to the American West when I was a child. Surely among those postcards was a photograph of a Hopi Maiden.

I don’t recall exactly when I made this connection between the sculpture and my early introduction to cultural diversity. But I believe those postcards from my grandparents predisposed me, when my monotypes began to shift to that part of the cosmos that lies beyond the earth, to include—unconsciously—implicit and explicit references to Native American and particularly, in my mind, to Pueblo culture. In fact, while making the prints, I was, perhaps, touching the other world expressed by Hopi Kachina dancers I once had the good fortune to witness in a kiva ceremony reminiscent of the “Dance of the Shalikas” documented by lithographer Ira Moskowitz (Polish–American, 1912-2001). Like no other known to me, this was a dance in two worlds: the earthbound and the spiritual. 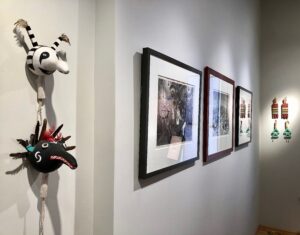 Rooted in my childhood, my appreciation for Native American peoples and their way of life runs deep. And so, quite naturally, when I began to purchase art for MoA, I was drawn to prints depicting that world. The Euro-American and American artists who created the prints included in this exhibit had rejected increasingly industrialized life in America’s East in favor of open New Mexico landscapes and “what they perceived to be the harmonious oneness of Pueblo life.” (Brody, Pueblo Indian Painting, 1997, p. 14) I try not to romanticize Native American life, which has always been fraught with hardship. But like those transplants from the East, I embrace the Pueblo reverence for Nature. So much so that during the Lakota/Dakota/Nakota protests of the Dakota Access Pipeline—which literally and metaphorically represents much of humankind’s misguided relationship with the earth—I created monotype #­­­­252. The image expresses the grief and rage I share with others regarding our rape of the planet.

May the values of the Pueblo peoples and the artists in this exhibit who honored them be “appropriated” universally in order to protect and preserve our sacred home.