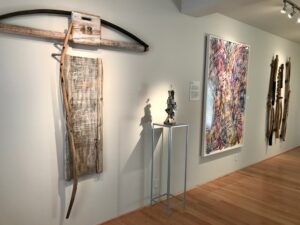 Shortly after purchasing a small commercial property in Salida, Colorado in 2013, I bought an assemblage sculpture by Deborah Jang at the Art Students League Denver’s summer art market. The combination of unusual shapes, colors, and moving parts, that suggested a figure, intrigued me. And, coincidentally, the sculpture bore the name “Sum of the Parts”—one of several exhibits I already anticipated mounting someday in the museum I planned to create.

Surprisingly, “sum of the parts” is a concept I learned during my study of biology in high school. The course drove home the fact that a fish has the capacity to swim, though none of its component parts, taken separately, can. Obviously the theme applies to all manner of systems. A single gear cannot lift a vehicle, but a jack made of gears, a screw, and a lever accomplishes the job beautifully. The picture in a woven tapestry results from myriad interlocking threads. The creation of a museum requires the cooperation of designers, builders, suppliers, promoters, and economists. In other words, “the whole is greater than the sum of its parts.”

The idea for an exhibit with this theme originated from “Dances in Two Worlds,” a wooden assemblage sculpture by Michael Mrowka, a co-participant in a Jungian art therapy class where I began to paint in the late 1980s. I bought the piece in 1991 to celebrate the publication of my second book, Dancing Girl: Themes and Improvisations in a Greek Village Setting. It later gave the title to my third book, Dances in Two Worlds: a writer-artist’s backstory and to the Museum’s first exhibit now on view in the Gate House. [Books are available from the museum shop.] 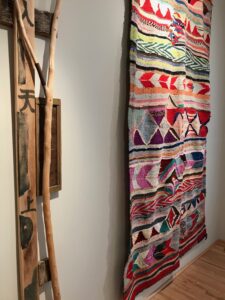 In 2020, after seven years of construction, the Museum’s main building was finally ready to occupy. Initially I had a different idea in mind for the first full-scale exhibit, but when I met and befriended assemblage artist Bernice Strawn—and purchased two of her smaller pieces, including “Enter Heaven Above”—I decided to begin with Sum of the Parts and feature her constructions. Bernice is the matriarch of Salida’s art community. I am drawn to her personally—she is resourceful, spontaneous, and playful. And I am drawn to her work—it is imaginative, organic, dynamic, and spiritual.

The show also features three large installations by this prolific and revered artist: “Bridges,” “Shrine,” and “Temple.” Taken separately, the components of Bernice’s “Temple”—weathered piano pinblocks, barrel staves, and a curved aspen branch—do not convey the idea implied by the title, let alone the feelings even the suggestion of a temple might evoke. But, again, the whole is greater than the sum of its parts.

In addition to Strawn’s and Jang’s assemblage sculptures, the exhibit includes a small, untitled, early 20th-century cubist-style work in metal created by Russian-American painter-sculptor, Irving George Lehman. During a visit to Baltimore in 2011, before the idea of a museum had presented itself, I discovered the piece in a dollhouse museum that sold some art and picture frames. I was struck by Lehman’s imaginative use of simple materials.

For variety, a vibrant 9- by 4.5-foot Moroccan rag kilim brings textile arts into the display. I was smitten by the scale of the rug, its array of patterns, and its striking color shifts the first time I ran across it at DecorAsia, a shop located on South Broadway in Denver’s extended arts district. I had visited the store on a whim just a few months before plans for the opening had been finalized. When I saw the weaving a second time, I realized that it perfectly fit the exhibit theme, and the Museum has a wall that accommodates it. Too, the kilim fulfills the Museum’s mission to acknowledge handmade utilitarian objects that are, indisputably, works of art.

As does a 20th-century Greek wood-and-stone threshing board, mounted upright on a metal stand designed and fabricated by Salida’s functional fine artist, Tammy Grubisha. This implement introduces the visitor to the Museum’s unlikely collection of art and artifacts that I have brought home from dozens of trips to Greece made over several decades. I bought the threshing board in Mycenae during my first journey back after purchasing the Salida property. A desire to make the Greek objects accessible to viewers in part prompted my creation of the Museum. 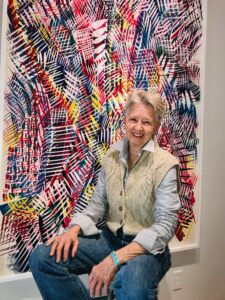 Finally, the show includes two of my own early tempera “impulse” paintings, “#41” and “#42.” I enlarged the non-representational images in order to emphasize the multiplicity of parts that in sum, to me, suggest “life force.”

Recently, as we installed Sum of the Parts, I asked myself what significance this concept has beyond the confines of the Museum walls—what relevance it holds at this time to the world stage.

I invite viewers to draw your own conclusions.

My own answer stems from my relationship with biology, which I taught for 15 years. Life on earth is, inarguably, the grandest living assemblage piece known to exist. Every thread we pull from the Tapestry of Life diminishes its integrity and—tragically—its sustainability. How much destruction must humankind inflict on this earth Temple before we understand the magnitude and the consequences of our abuse—before we assume instead the role of guardian, of keeper.