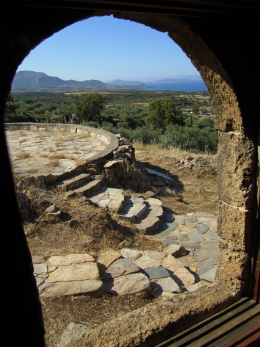 This is the window I unconsciously represented in my painting #114, which I published in the 4 July 2011 post. It belongs to the “sheep corral” I purchased in the Greek village, Elika, in 1984. The purchase was motivated by an inexplicable urge to have a village home of my own to return to after having rented there for two years. At the time I committed myself to the house, I had no idea what my relationship to the village would look like in the long run. Indeed, since taking occupancy of the house in 1991, I have returned often to Greece as an independent small-group travel guide, but I have spent precious little time under my red clay-tile roof. This year I spent only 10 days in Elika.

When I used to consider my relationship to the house, I thought of it in physical terms—walking the footpath to my door, pruning my two olive trees, mixing mortar and setting stone. Being there, that is to say. But my understanding changed when I began to see evidence of the house in paintings I made while residing in my other home in Colorado. Every image in my oil pastel work, for that matter, represents some aspect of my Greek experience: the house, a chapel built over a spring, a heather-clad hill under a fall sky, an olive tree. True, I immersed myself in day-to-day village life side-by-side with my neighbors during annual extended sojourns and am referred to as an Elikiotissa—a woman of Elika. True the house restoration has been a hands-on project spanning many years. Still, I was surprised to learn through the painting experience that, while the window in the photograph above looks out to sea, the opening depicted in painting #114 is a window into my soul.