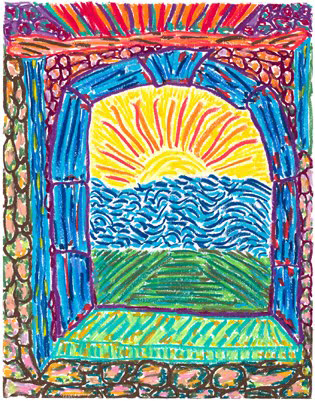 For years I had envisioned my oil pastel painting #114 on the front cover of my anticipated 3rd book, Dances in Two Worlds—the realm on one side of a window expansive and bright, that on the other side implied but not defined. I understood that the image draws one in—perfect for a book cover. It is, I realized after I had completed it, the representation of a window of the house I have been restoring in Greece.

On the back cover, I had pictured a photograph of me replacing the lintels over the door of the house. It captures the intimacy of my relationship with stone that is conveyed by the painting. And it refers to one of the themes—my life in Greece—that I write about in the narratives that accompany the paintings in Dances in Two Worlds.

But my graphic designer, Sammy Lee, was not satisfied with this cover concept. She wanted to take the design to a “higher level.” “What do you envision?” I kept asking her. Finally she said she liked to watch me apply ink to my monotype plate with my brayer—the sweeping gesture it entails. (Whether by chance or by design, Sammy and I had started printmaking together with Mark Lunning at the Art Student’s League of Denver last fall, and I engaged her to design my book straightway.) Suddenly, I got it. Going from the first painting I had ever made (as an adult) reproduced inside the book to the most recent painting, before going to press, on the cover!

I was excited. I had already been painting what I knew to be the Wyoming sky (see #185 in the book). The next thing I knew, I had painted the Wyoming night sky I write about in the first essay, “Fireflies.” The tall narrow proportions of these night sky paintings did not fit the dimensions of the book, however, and Sammy and I were both disappointed not to include them in the final manuscript. But now I had a chance to bring the metaphor of the Wyoming night sky full circle by painting it for the cover.

I was as scared as I was excited because I had never before worked “on demand.” Painting for me had always been about letting go of control, not taking charge of the process by prescribing the outcome. When I went to the studio the next day, I prepared a plate the exact same size as the front and back covers combined. I kept the idea of a Wyoming night sky in mind and visualized white space for the book title. Then I got to work. My monotype #197 emerged.

The day after that, I set about, in the same manner, to create an image that would encompass the flaps as well. The entire time that I worked, I focused on the possibilities, not the outcome. Intuition took me where intellect would never have traveled. On which side of the window does intuition dwell? In the deepest recess of one’s inner landscape? Or somewhere beyond the stars?