For the Love of It 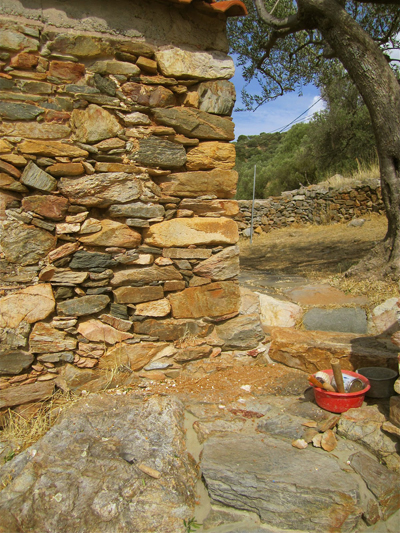 To reach the front door of my house in Elika, Greece, I must pass through a narrow opening between the upper corner of the building and the end of a stone wall I raised to demarcate what has come to feel like a scared precinct on a hill. Late one afternoon some two years ago now, I had pruned the wild olive tree that grows just above the dwelling. As night fell, I gathered armloads of cut branches, rounded the corner, and moved through that passage intent only upon tossing the branches downhill and calling it a day. But as I stepped through the opening, I heard a menacing hiss that stopped me in my tracks. A second hiss confirmed my worst fears—a snake alerting me to its presence. The sound came from the face of the house not an arm’s length away. But in the dim light of dusk, I was not sure I would be able to pinpoint its source and do the deed that would prevent the viper from delivering the bite that I understood would be venomous. Nevertheless, I dropped the branches and ran for my broomstick, the only defense I had on hand.

I had been visited by a hissing snake on two occasions in the past, so I knew it would be long and coiled up, head raised cobra-like. Evoking the skill of Artemis, I took aim at a small ledge in the wall where I thought I could make out the shadow of the threat. I summoned my courage. I delivered a fatal blow.

I was lucky, the threat removed. But the niche—an invitation to future dangers—remained. I vowed then and there to chink and point that area of my wall at first opportunity.

That opportunity presented itself recently. I arrived in Elika two weeks ago, settled in, and set to work. My goal was to repair about one-and-a-half square meters of wall that had been damaged by years of seasonal downpours. The first day at work, I dug out loose chink stones and dry mud, hosed down the area, and then collected and placed new chink stones to fill gaps. The next six days, I mixed batches of mortar from sand, cement, a lime source called asvesti, tint, and water. Working six to eight hours a day, I filled even the tiniest spaces in the surface of the wall with mortar while setting the new chink stones. 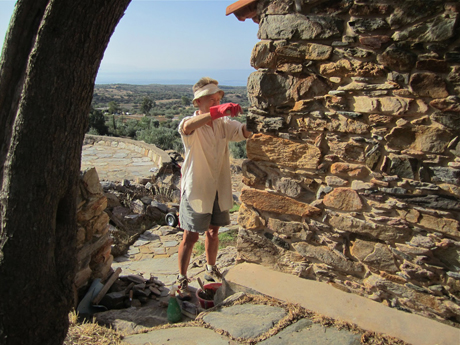 The effort of digging out the hard mud mortar. The effort of finding enough stones the right size and shape to fit the gaps in the wall. The effort of mixing the dry ingredients into a thick consistent paste. The discomfort of laboring under a scorching late summer sun during the long hours required to complete a job that cannot be hurried. Why did I bother? Was the possibility of another hissing viper reason enough?

Not really. I chink and point for the pleasure of practicing techniques I have mastered over time; to experience the communion and quietude of what has become for me a Zen meditation; to breathe life into something by restoring it to its original beauty, here creating a tapestry of dancing stones; to honor a forgotten race of builders and their forgotten way of life, as well as the dying man who, by selling me the house, entrusted its care to me.

I don’t recommend this work to others. And although I finished chinking and pointing the interior walls of the house years ago, before the roof went on, I now know that I will never complete the restoration of the exterior walls myself. I purchased the house when I turned 40. I now approach 70. I am no longer willing or able to expose myself to the treachery of balancing for hours high on a ladder with stones and mortar and tools in hand in order to complete the work. But I also know that, as long as I am able, I will not stop engaging and reaching—for the love of it.